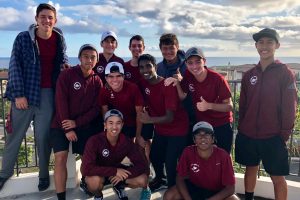 Boys Varsity Tennis went on the road on Monday to play a Division I CIF quarter-final match against San Clemente High School. After some excellent play in both singles and doubles in the first two rounds, the Pack was up 7-5 going into the last round. Senior, Jason Weisman and Sophomore doubles partners, Joey Anagnos and Lucas Rival won their sets but the team wasn’t able to get the three sets needed to win the match outright. The match was tied at a 9-9 and after tallying all the games played, CHS fell short by 9 games. The Pack ended the season with a 18-2 record. Their only other loss was against La Canada High School in the preseason.

Jason Weisman, Senior Andrew Weisman, Junior Ben Stapp, Anagnos and Rival will all compete in the CIF Individual Singles and Doubles Tournament starting on May 16.