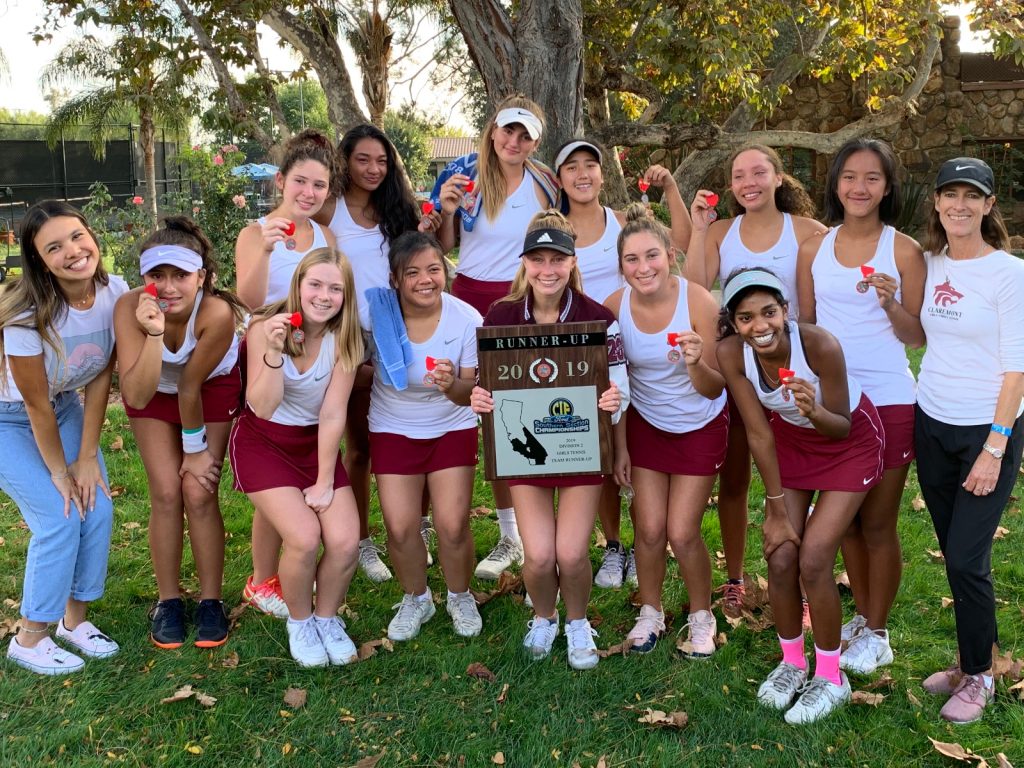 My father, Fred Felsch, was fond of saying that life is a game of inches. It was far from an original thought on his part—however, it is an apt description of tennis, his favorite sport.

The ball can hit the net and dribble over, or it can fall to your side of the court. A beautiful serve that hits the line can be an ace or can be called out.

That was certainly the truth last Friday as the Claremont High School Wolfpack faced the Woodbridge Warriors in the CIF Division Two Team Championships at the Claremont Club.

There were close calls and heartbreak losses all day. There were also come-from-behind-wins, and moments when it seemed like victory was within grasp.

Unfortunately for Claremont, the result came down to the narrowest of margins, and this time it did not go their way. After hours of tough competition, the teams tied on sets at nine, but after tallying games the Warriors were declared the winners, 82-80.

The pendulum tilted the other way just two days earlier when the Wolfpack got an upset victory over number one seed South Torrance, that also came down to counting games. The narrow line between winning and losing is part of the game, as Coach Kathy Settles pointed out as she consoled her team following the match.

“We got lucky on Wednesday and it’s a total privilege to play here today,” Coach Settles said. “It’s hard I know and it’s going to hurt for a long while but lift your heads up high, you did a phenomenal job. This represents three months of really hard work, and you guys have come so far. There are 30 other teams that would love to hoist that [second place] plaque.”

As the first round ended it looked pretty bleak for the Pack. Only the number one seed singles, Goldie La, and doubles team of Caren Uribe and Camile Movafagian won their sets, giving a 4-2 lead to Woodbridge.

In the second round, Claremont turned the tables, and the comeback of the season award goes to doubles team Jahday Drewery and Salma Mohideen. The Pack was down 5-1 against Katie Park and Ilana Covino, but then won six straight games to take the 7-5 win. That turnaround combined with wins from La, her sister Sydney La, and Jacque Pearsall in singles, and another doubles win from Uribe and Movafagian, put Claremont ahead 7-5.

The girls needed to split sets with Woodbridge in the final round, but it was not to be. Both La sisters won their sets but Pearsall lost, which brought the championship down to a few doubles matches.

Drewery and Mohideen had another razor close match that they lost on a tie breaker, so the last match of the day came down to Uribe and Movafagian versus Park and Covino.

The Pack was ahead 4-2, but it was Woodbridge’s turn to come back winning the next three games. Claremont won the next two to get ahead 6-5, but Woodbridge forced the tiebreaker by winning the last game. There was an air of inevitability during the tiebreaker, with Park and Covino controlling the momentum and winning 7-3.

The court fell silent as the coaches tallied the games, but soon a shriek of joy came from the Woodbridge girls as they mobbed Park and Covino. The Claremont side broke down in tears.

As Claremont collected on a grassy area a short while later to pose for a photo with the runner up plaque, Claremont Athletic Director Mike Collins had a few words of encouragement.

“No other girls tennis team has ever gone this far, you are the best we have ever had and it’s a very old school,” he said.

“What Mr. Collins says sums it up, this is the best girls tennis team we have ever had. They are a fantastic group of girls and have been an absolute pleasure to coach. We have won a lot of amazing matches and beat a lot of amazing teams,” she said. “What I have asked of my girls is whether when it is over, did they do everything they could to win and I believe they really did.”

Only three players will be graduating, so the core of Claremont’s team will return in 2020. However, reaching the championship match means they will also be bumped up to division one. “It will be a whole new challenge,” Coach Settles said.

The season is not entirely finished, as Goldie La, Uribe and Drewery will represent the Palomares League in the CIF Individual Tournament, starting November 25 at the Claremont Club.

In order to qualify, players needed to reach the finals of the singles or doubles draw of the eight best players or teams in the league. Claremont went a step further, winning both draws, and will be the number-one player and team from the Palomares League.