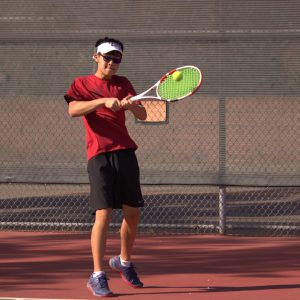 Boys Varsity Tennis came up short today in their preseason match-up against a solid team from Los Osos.  The Pack wast tied 3-3 after the first round thanks to a great win by Nathan Kim (JR.)(pictured)  and Aidan Poopat (JR.) at number 1 doubles.  They won their set against Los Osos’ number 1 doubles team in a tie-breaker.  The Pack wasn’t as tough in the second round as they lost two tie-break sets and gave up a 5-2 lead in another set.  Down 4-8 going into the last round, they were only able to pick up 2 more sets in singles to finish the match 6-12.  Ben Stapp (SR.) won two of his three sets at number 1 singles today moving his record to 11-1.  The Pack begins league play on March 11 against Bonita High School.